2 July 2016: Berlin protests against the “Quds March”, against racism and anti-Semitism 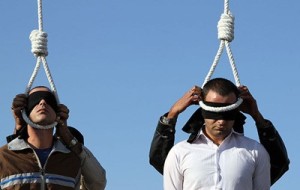 Shortly after the Islamic Revolution, in 1979, Iranian religious leader Ayatollah Khomeini designated the so-called Quds Day as a global day of combat mobilising for the annihilation of Israel. Quds is the Arabian name of Jerusalem. In spite of the current “softies“ in power in Tehran, that basic objective has not been cancelled.

In Germany, too, the ”Quds March“ has been staged and supported by anti-Semitic and anti-Israel organisations for decades. Hatred against Jews and Israel has since linked a motley crowd of supporters: islamists, nazis, racists across a broad range including the anti-Zionist left.

Anti-Semitism is a main source of the evil energy powering the Iranian regime, and a determining factor in its policies. Israel is the constant target of its destructive motivation. Time and again, the Iranian government has underlined its aim to eliminate Israel by force. Iran pays for the missiles Hamas rains on Israel. Iran does not hide its intentions either: long range missiles tested in March 2016 showed inscriptions of Israel must be rooted out.

Iranian Quds Brigades are responsible for terrorist attacks around the globe. Tehran’s co-operation with Syrian dictator Bashar al-Assad und the Lebanese terrorist militia Hizbollah is meant to sustain an “axis of resistance“ against Israel. Critics of the Iranian regime are invariably denounced as “Zionist agents”.

At the same time the mullahs, assisted by their willing executioners, continue repression of their own population. Critics, “infidels“, women, LGBT and national minorities such as the Kurds and the Bahai are relentlessly suppressed, persecuted, detained, tortured, murdered or publicly executed. Under Hassan Rohani, a supposed reformer, more executions than ever have been performed: almost 1000 in 2015, according to Amnesty International. That is the highest number of executions worldwide in relation to a country’s number of inhabitants. In Syria, the Iranian regime shares direct responsibility for the crimes and mass murders perpetrated by their ally Assad. Assad’s war on his fellow Syrians has cost half a million dead and has turned several millions more into refugees. The Syrian dictator is able to cling to power only through the massive presence of Iranian revolutionary guards and Shi’ite militias.

It is nothing but an outright scandal that Germany is still in the forefront of those who do business with the Tehran regime. It is equally a scandal that Sigmar Gabriel, Minister of Economy, has visited Iran for the second time within a year early in May. A government-funded, leading cultural institution in Germany, the Prussian Cultural Heritage Foundation, continues to link up with Tehran’s Museum of Contemporary Art, in spite of its calling for a competition of, and awarding a prize to, Holocaust-denying cartoonists. Compromises with Tehran do not change the regime’s ideology or its actual policies. On the contrary, raising sanctions and releasing billions of frozen funds after the signing of the nuclear deal help the regime to proceed on its road towards nuclear armament and go on spreading terror inside and outside the country.

The imminant Quds March is intended to mobilise Tehran’s supporters in Germany. It will highlight the anti-Semitic and generally destructive character of the regime’s action. A demonstration against this blatant display of racism and anti-Semitism in Berlin is planned for 2 July. Its organisers appeal to all Members of the German Parliament, the Berlin Senate, and all democratic organisations of civil society in Germany to support and join the public protest against the Quds March.

The organisers of the demo will not allow any utterances of xenophobia or racism. This text is based on the public appeal made by the Mideast Freedom Forum.