Despite Corona we remember: 75 years ago today, Buchenwald and Mittelbau-Dora were liberated.

On April 11, 1945, the Buchenwald concentration camp and the Mittelbau-Dora forced labor camp were liberated by prisoners and U.S. soldiers. Nearly 80 000 people had been murdered in these two Nazi death facilities  by means of torture, forced starvation and pseudo-medical experiments. Soviet prisoners of war were shot. The concentration camp was located in the immediate vicinity of the “Dichter- und Denkerstadt” Weimar. Buchenwald remains a symbol of the Nazi reign of terror brought forth by the nation of Goethe and Schiller. But Buchenwald is also remembered for the prisoners’ resistance, both secret and open, against the SS. 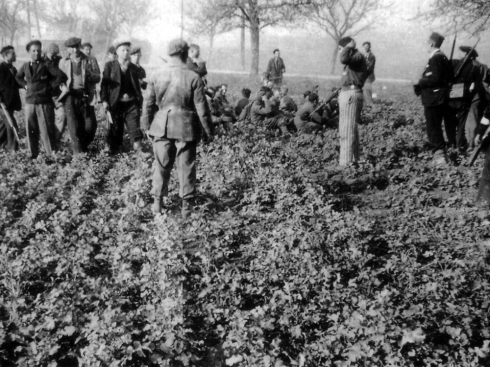 writer, researcher, archivist, artist, activist, Jew living and working at Bremen, Nienburg, Playa del Inglés, Ruidoso, Lanciano www.thomasgatter.eu END_OF_DOCUMENT_TOKEN_TO_BE_REPLACED
This entry was posted on Saturday, April 11th, 2020 at 5:40 pm and tagged with Arbeitskreis Gedenken, Buchenwald, Concentration camp, forced labour, Holocaust, Liberation, Mittelbau-Dora, Porrajmos, Remembrance, Shoa, Thomas Gatter and posted in Publikationen. You can follow any responses to this entry through the RSS 2.0 feed.
« Exhibition at Nienburg, North Germany, City Hall on 26 January: The Yellow Star
Berlin monument to the Sinti and Roma of Europe murdered by the Nazis is endangered »

This site uses Akismet to reduce spam. Learn how your comment data is processed.